Have you ever gotten nervous when someone asks for your testimony?

Do they want the complete, unabridged, nitty-gritty of my 33 years on this planet? Or do they really just want to know the really difficult, dark, bad, or frustrating things I’ve experienced, and what I did to not stay there? Why do testimonies always seem to start out with a person in a really horrible situation? What if I’ve had a pretty good life, done okay navigating big decisions,  never had any major crisis, and am still loving God? Is that even a testimony?

Well, what is a testimony, exactly? I’m glad you asked!

In the Old Testament (OT) the word testimony came into use after the law was given at Mt. Sinai. It specifically refers to the commandments written on the tablets that represented Israel’s relationship and responsibility to God (from Vines Dictionary).

In the New Testament (NT) the word testify, which means to bear witness to, is what I think people today mean when they want to hear someone’s testimony. Think about a person testifying in court. They are acting as a witness, telling others what they have seen, and know to be true. In the case of a Christian’s testimony, we often mean, “how God pulled them out of some really bad stuff.” Which, for all of us, eternally speaking, is the truth.

Since this is where the idea of ‘giving a testimony’ comes from, then there should not be a single Christian on the planet without something to say about what they have seen, and encountered in Jesus! The very fact that Jesus has been revealed to the human heart, and we can now know him intimately, is a great testimony! (So if you can think of nothing else, ever, to testify about – there is that!)

In the OT, God’s people had the laws written on stone tablets as a reminder of their relationship and responsibility to God. The NT tells us that now we have this truth written on our hearts – the testimony of God’s divine plan and the goodness of his covenant is engraved on our hearts. We are a living testimony, a letter to the world to declare the relationship God has with us, and wants to have with everyone.

This is the covenant I will make with the house of Israel after that time, declares the Lord. I will put my laws in their minds and write them on their hearts. I will be their God, and they will be my people. Hebrews 8:10

You show that you are a letter from Christ, the result of our ministry, written not with ink but with the Spirit of the living God, not on tablets of stone but on tablets of human hearts. 2 Corinthians 3:3 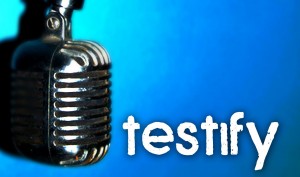 There is one more aspect of the word testimony to look at: 2 Thess 1:10 says, “…because you believed our testimony to you.” This isn’t talking about believing, or getting emotional about a good story of how God has worked in someone’s life. The testimony given in this instance was not just proclaiming the truths of the gospel, but proclaiming the power of the truths that they had seen and experienced first hand. These early missionaries were not just spouting doctrine; they had actually witnessed the power of the message they were proclaiming!

I am so excited to begin to look at a testimony as simply telling others about the power of the truths that God has revealed to me!

What has God shown you? Did he give you revelation about how to be a better spouse or parent? Has he revealed to you how to run a great business? Has he revealed his Word to you in a way that set you free from depression, anxiety or fear? Do you think that there are others who could use that revelation?

The power in revealed and experienced truth is our greatest testimony!

So, what is my testimony? That God is good, and loves us perfectly.